Let's Talk About Six: A Life in the Season of a Liverpool Fan 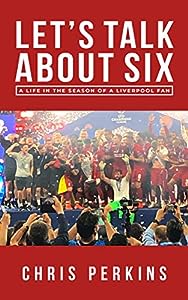 Let's Talk About Six: A Life in the Season of a Liverpool Fan

Description of Let's Talk About Six: A Life in the Season of a Liverpool...

An ?on the hoof? account of Liverpool Football Clubs record-breaking season. From pre-season through to the CL final in Madrid, the book is a running commentary from a long-term fan and season ticket holder of every game and every thought and feeling in between.
Structured only by what I was feeling at the time of writing, the book covers the many highs of the season, along with the lows, the celebrations and the concerns that every fan will encounter when watching their team. Every game is reported but in the context of where I am at the time, whether that be at the ground, watching on TV, listening on the radio or sitting on a beach.
The book starts at the beginning of July 2018, as Jurgen Klopp announces the start of the season, picks up the pieces of the previous season and how Liverpool rebuild ready for the challenge ahead. We then follow the journey of this unique season, the race with City for the title and the highs and lows that accompanied it. The near failure of the Champions League group stage and the path to ultimate glory.
The diary format is broken up by a series of short interludes that talk about my personal path towards being a Liverpool fan in the trophy laden 1970?s and 80?s and the family trauma that formed this life long attachment, culminating with my experience at Hillsborough and the way it affected me afterwards.
The book is a very personal, hands-on interpretation of the season, but will appeal to a wide section of fans who want to relive the experience as told by a fellow fan.

only £20.18
In Stock
View Add to Cart
CERTAIN CONTENT THAT APPEARS ON THIS SITE COMES FROM AMAZON SERVICES LLC. THIS CONTENT IS PROVIDED 'AS IS' AND IS SUBJECT TO CHANGE OR REMOVAL AT ANY TIME.