Steven Gerrard made his 300th Premier League appearance for Liverpool on 13 April 2008 in a match against Blackburn Rovers. He scored the opening goal in this match and went on to finish the season with twenty-one goals in all competition. The following season he made his 100th appearance in European club competition for Liverpool on 10 March 2009 against Real Madrid and went on to score twice as Liverpool demolished the Madrid giants 4–0. Four days after the comprehensive victory over Real Madrid, Gerrard would score at Old Trafford for the first time from the penalty spot, putting Liverpool ahead on their way to a 4–1 victory over Manchester United.

Soon after these spectacular results, three-time FIFA World Player of the Year Zinedine Zidane hailed the Liverpool skipper, saying "Is he the best in the world? He might not get the attention of Messi and Ronaldo but yes, I think he might be." The season ended with Gerrard being named as the 2009 Football Writers' Association Footballer of the Year, becoming the first Liverpool player to win the award in nineteen years. Liverpool came close to winning the Premier League that season but the following season was a poor one for the club.

Although Gerrard ended the 2009–10 season with a total of 12 goals and 9 assists from 46 matches, the team struggled on the pitch while the club generally struggled off it. The in fighting behind the scenes escalated and it was no surprise that effectively, Rafa Benitez's position became untenable. Following the 2009–10 season, Rafael Benitez did, as expected, depart Liverpool after six years and was succeeded as manager by Roy Hodgson, who quickly assured fans that Gerrard would not be sold. Hodgson was right about Gerrard not leaving Liverpool, but unfortunately for him, his own position as manager did not last long as he left the club by mutual consent in January 2011.

Kenny Dalglish took over from Roy Hodgson but, as far as any major success was concerned, Liverpool were only left with chasing a top four place and success in the Europa Cup after Dalglish's appointment. The club achieved success in neither of those and the season petered out tamely. Gerrard's season was relatively quiet by his standards, but he did still contribute some important goals along the way.

Gerrard scored his first goal of the 2010–11 season from the penalty spot in a Europa League qualifier against Macedonian side FK Rabotnicki on the 5th August 2010 with his next two goals coming on 19 September at Old Trafford in a 3–2 loss against Manchester United. He followed this up with a headed equaliser in a 2–2 home draw with Sunderland. Eleven days later Gerrard came off the bench to turn the game when he scored a second-half hat-trick in a 3–1 win over Napoli in the Europa League.

Gerrard missed the start of English Premier League season 2011-2012 due to groin injury which had kept him away for much of the 2010-2011 season as well. Gerrard made his first start for Liverpool squad in the October match at Anfield against fierce rivals Manchester United. Gerrard scored Liverpool's only goal in the match, from a free kick, which ended in a 1-1 draw.

However, Gerrard's injury woes continued because on October 29, Gerrard underwent a treatment to clear an infection in his right ankle, which was placed in a protective plaster cast. Gerrard returned to first team action on Boxing Day in the match against Blackburn Rovers at Anfield, when he came off the bench. On 30th December, Gerrard again came off the bench against Newcastle United and scored another fine goal.

Gerrard helped Liverpool reach their first cup final at Wembley Stadium in 18 years as Liverpool won 3-2 on aggregate against Manchester City. Gerrard scored a penalty in both legs to secure a trip to the Carling Cup final against Cardiff in February 2012, a final Liverpool went onto win under dramatic circumstances when they beat the Championship side 3-2 on penalties after the game ended 2-2 after 120 minutes at Wembley.

The Funniest Rangers Quotes... Ever! fro...

The Mental Toughness Handbook: A Step-By...

High Performance: Lessons from the Best ...

My Story by Penguin

Carra: My Autobiography by Penguin Audio

A Northern Soul: The Autobiography by Pe...

The Monster Collection from Audible Stud... 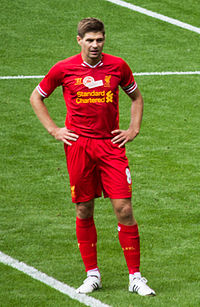 Gerrard during his testimonial in 2013

The date of 18 August 2012 was a milestone date for Gerrard as it saw him celebrate his 250th match as Liverpool captain.

On 15 July 2013, Liverpool offered Gerrard a contract extension. As a thank you for his fantastic dervice to the club, Liverpool awarded Gerrard a testimonial. This was played on 3 August 2013, where Olympiacos were the opponents. It was against Olympiacos of course that Gerrard scored arguably his most celebrated goal in the successful Champions League campaign in 2004/05. Alder Hey Children's Charity, of which Gerrard is a founding partner, received £500,000 from the proceeds.

On 16 September 2013, Gerrard led Liverpool out as captain for the 400th time in a 2–2 draw at Swansea City. The following month, on 5 October 2013, Gerrard scored in a 3–1 win against Crystal Palace. In doing so, he became Liverpool's first ever player to score in 15 successive league campaigns.

Another accolade to come his way that month was when Gerrard became the longest-serving Liverpool captain.

The following season - 2013/14 - saw Gerrard become so close to lifting the Premiership title with his beloved Reds. However, Gerrard had an integral part to play in a very defining moment of that season.

On 27 April, Gerrard had a key role to play during a crucial game against Chelsea. Liverpool were top of the League when they faced Chelsea in their third last match of the season. Gerrard inexplicably slipped while receiving a pass virtually on the halfway line, thereby enabling Demba Ba to score the opening goal for Chelsea. Chelsea went on to win 2–0, which meant that Liverpool's title hopes were no longer in their own hands. It was a game that really speaking Liverpool didn't need to win. A draw at that stage of the season would not have been an issue.

Gerrard finished the season with 13 goals and the League's most assists at 13. He was also nominated for the PFA Player of the Year award that year.

The following season - 2014/15 was Gerrard's last in a Liverpool shirt. On 1 January 2015, Gerrard announced that he would leave Liverpool at the end of the season. During that season however, Gerrard made his 500th league appearance for Liverpool in a goalless draw against West Brom on 25 April. As a result of this he became only the third player ever to achieve 500 or more Premier League appearances for one club, after Ryan Giggs and former teammate Jamie Carragher.

His final Anfield appearance for Liverpool was on 16 May 2015 against Crystal Palace. A game that Liverpool lost 3-1. The following week Gerrard made his final appearance for the club in a 6–1 defeat at Stoke. Quite fittingly it was Gerrard who scored Liverpool's goal that day.

It goes without saying that Gerrard is a Liverpool legend. Not unsurprisingly, when he left, it was mentioned that that there will also be a place for him at the club if he did ever wish to go back to the club.

After almost two years with LA Galaxy, Gerrard announced his retirement from playing at the age of 36 on 24th November 2016. His wish to return to Liverpool in some capacity was fulfilled in January 2017 when he was appointed Youth Coach.

Welcome home Stevie G - we hope you have many more years with your beloved Reds.